The 2017 Legends 13U Prospect Team on paper looks like the most dominate and unstoppable team that we have had in our 11 year history. The size of this team, the power, the experience and the depth of the pitching staff makes this a very dangerous team to play. "I do not see any easy outs on this team, we have some big time players that project very well for the next level so I'm really excited to see how this all plays out. This team had a record of 50-8 last year as 12 year olds and we added 5 impact players to an already stacked team" says head coach Mike Costantino.

Eric Wing (Georgetown, Ma), Colin Lemieux (Warwick, RI) and Tom McAndrews (Haverhill, Ma) are 3 guys that figure to be right in the middle of things offensively. All 3 of these guys are big strong kids that are going to put up huge numbers.  Eric was the MVP of the 12U Prospect Team last year with a (.583) batting average, (81) hits, (23)HR's and (70) RBI's.  He also won 9 games on the mound while striking out 96 batters in 63 innings. Colin is 5'11, weighs 170 and is one of the most talented 13 year old players in the country. He led his RI Little League Team to the Little League World Series last year and will be a force on the big diamond this year.  "I've been coaching this level for a few years now and he is one of the best I've ever seen for his age. He has the size, bat speed and arm strength and is a very coach able kid that is learning and getting better at each practice." says coach Mike. Tom is another big bopper who is 5'10 and weights 200 pounds and figures to be right in the middle of that line-up.  He is a pure hitter that will hit for power and average.  He has such a smooth swing with great bat speed and the ball jumps off his bat on every swing. Tom can play multiple positions which makes him very valuable as a player.

Ryan Hutchinson (Hamilton, Ma), Luke McClintock (Hamilton, Ma) and Ashton St. Pierre (New Durham, NH) will add lots of power, solid pitching and great defense to this team.  Ryan is a huge pick up for this team, he is a 5'11 left handed hitting 3rd baseman that is a serious prospect. His hand eye coordination is off the charts and can hit for average and power.  He is a tremendous defensive 3rd baseman and I would be surprised if there is anyone better defensively in the league. Ryan also will be one of the front line pitchers.  Luke who had a solid 2016 season with a (.448) batting average, (60) hits and (57) RBI's and also won 9 games on the mound and struck out 78 batters in 49 innings.  Luke is 5'7 and throws very hard and when he is on he's going to be very tough to beat on the mound. Ashton was one of the best pitchers in the EBL last year so adding this lefty pitcher to this team is equivalent to the Boston Red Sox adding Chris Sale. He is an ace that can dominate and take over the game each and every time he steps on the mound and he will also add a big lefty bat to the line up.

JR Bozek (Danville, NH), Roman Ercoli (Concord, Ma), Payton Palladino (Danvers, Ma) and Peter Martin (Manchester, Ma) are 4 guys that can play any infield position and also play the outfield if needed.  These guys are all very solid baseball players that bring a lot to the table on a daily basis.  JR will be one of the catchers on this team but will also play infield, outfield and will pitch when needed. Roman will be another guy that can play any infield position along with the outfield.  Last year he had 10 wins on the mound and is expected to be a top of the rotation guy again this year along with being a big contributor with the bat.  "Roman is a big piece to this team and we need him to have another strong year" says coach Mike. Payton is a solid 2nd baseman who can also play the outfield.  He had a tremendous season last year hitting (12) HR's, (78) hits and (16) doubles.  He is a smaller guy that squares up the ball on a consistent basis and hits balls very hard all the time. Peter can play all infield positions and will be counted on to put up big numbers on the mound.  He won 10 games pitching last year by throwing strikes, mixing up his pitches and being able to shut down the running game. Peter is a contact hitter who can put pressure on the defense with his base running ability.

Michael Tonelli (Shrewsbury, Ma), James Carmilia (Danvers, Ma) and Chase Eary (Danvers, Ma) round out the 13U Prospect Team.  Michael is a big strong kid that I think will hit very well on the big diamond.  He can play 3rd base and the OF and will be a threat on the bases. "I think Michael will have a break out year offensively, he's looked really good so far during the winter practices" says coach Mike.  James is a solid outfielder that can also pitch when needed.  He can hit balls very hard and a long way and will be a big addition to this team.  Chase Eary will be one of the catchers and can play all the outfield positions.  He is a lefty bat that had a solid year last year hitting (14) HR's, (46) RBI's and (42) SB's.  All 3 of these guys are big strong kids that are very athletic and should be big contributors to this team.

The 13U Prospect schedule is going to be very demanding in 2017 with this team playing between 65-70 games.  They will be participating in the NYBC Qualifier in NY, Perfect Game Super 25 in NY, Perfect Game Super 25 at the NEBC.  They will also be playing in two week long invite events including Perfect Game World Series in Georgia and the Perfect Game BCS in Ft Myers, Florida. This team will also be playing in a few local tournaments at the New England Baseball Complex along with the Legends Top 15 Tournament.   The assistant coach will be Thomas Cadmus (Powder) who was the assistant with these guys last year as 12 years old.  He is a very young, dedicated and energetic coach who will become a head coach for the first time in the 2018 season after one more year as an assistant.  "I'm excited to have Thomas as my assistant this year and I feel like he will learn a lot from me and get the necessary experience so he can run his own team in 2018." says coach Mike. 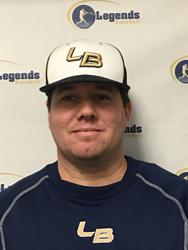