As we get closer to opening day it's becoming more clear just how good the 14U Legends Prospects are going to be.  The power, speed, athleticism and depth on the pitching staff makes this a very dangerous team to play.  "This team can flat out hit and most importantly these guys can play defense with the best of them. We have 7 different guys that can play shortstop and play it very well, that allows our pitchers to pitch to contact and not have to rely on the strikeout because we have so many good defensive players.  I've been coaching with Legends Baseball for 11 years now and I've never been so excited about a team like this 2017 squad." says Coach Eli Munkholm.

The "Bash Brothers" Lee Pacheco (Salem, Ma) & Tyler Martin (Acton, Ma) are the two best players in the Elite Baseball League.  Lee and Tyler dominated the league last year and our coaching staff is really looking forward to them playing on the same team and being in the same line-up for the  2017 season. "These two guys are Division I College Baseball Prospects with plenty of room to get better.  Tyler was a huge pick up for us and has fit right in by working his butt off during the first few months of practices.  I have no idea how pitchers are going to deal with Lee and Tyler but it's going to be exciting to watch. We might be seeing the best 3-4 combo in the history of Legends Baseball with fireworks going off each and every weekend " says Eli.  Last year Lee hit .503 with 78 (hits), 12 (doubles), 6 (triples), 5 (HR's) with 43 (stolen bases) and was 10-1 on the mound with a 1.66 ERA. and had 69 strikeouts in 67 innings while missing 13 games with an injury.  Tyler hit .529, 83 (hits), 26 (doubles), 7 (triples), 8 (HR's), 75 (RBI's) and 42 (stolen bases) last year while going 13-1 on the mound with a 1.90 ERA.

Jack Penney (Wakefield, Ma), Tommy Beauregard (Salem, Ma) and Matthew Sapienza (North Andover, Ma) are three guys that put up very big numbers last year and are expected to do the same this year.  They are solid hitters that are very athletic, can pitch and play any position on the field. Jack plays mostly shortstop and hit in the top of the order last year and was very productive.  He hit .373 with 63 (hits), 12 (doubles), 4 (HR's) and was one of the top of the rotation guys going 9-1 with a 2.01 ERA. Tommy was the lead off hitter who played a lot of outfield but is also a very good infielder and was the big game pitcher on this team last year.  He hit .358 with 54 (hits), 3 (triples), 2 (HR's), 44 (stolen bases) and was 9-3 on the mound with a 2.48 ERA in 82 innings pitched. Matthew can play any infield position and was huge on the mound last year going 11-2 with a 3.24 ERA. Offensively he hit .333 with 53 (hits), 9 (doubles) and 28 stolen bases.

Jack Gilligan (Salem, Ma), Matt Maloney (Windham, NH) and Jax Budgell (Newburyport, Ma) are the catchers on this team but all 3 guys can play multiple positions. These players are very strong offensive players that should have tremendous years. "Jack, Matt and Jax are very solid line drive hitters who put up huge numbers last year and I'm expecting even better years from these guys in 2017.  They look bigger, stronger and are hitting balls in practice very hard so I'm very excited about whats to come this season from the 3 catchers" says Eli.  Jack had a monster season last year hitting .437 with 76 (hits), 13 (doubles), 4 (triples), 2 (HR's) and 75 (RBI's). Matt hit .394 with 69 (hits), 12 (doubles), 31 (RBI's) and 21 (stolen bases). Jax played on the Legends Navy team last year and put up solid numbers all season long and earned a spot on the Prospect team this year and figures to be a huge impact guy.

Marcus Montagnino (Gloucester, Ma), Alex Bodnar (North Andover, Ma), Carter Coffey (Wenham, Ma) and Ben Olszak (Danvers, Ma) are 4 returning players from last years team that will be impact players on this years squad.  "Marcus was the best outfielder in the EBL last year in my opinion.  He made so many big plays all year long especially throwing out the runner at home plate to win the Perfect Game New England Championship." says Eli.  Marcus also added a .379 average, 53 (hits) and 9 (doubles).  Alex can play any infield or outfield position and has great hand eye coordination, he only struck out 13 times in 135 plate appearances and batted .321 last year. Carter is the spark plug of the team who can play any position on the field and play it well.  He had 27 (hits) with 20 (stolen bases) last year and won 3 games on the mound with a 1.30 ERA. in 27 innings pitched. Ben is a middle infielder who can also play 3rd base who is as smooth as they come in the infield.  His season was cut short last year with a broken ankle but in limited time he hit .373 with 25 (hits), 22 (RBI's) in only 35 games.  "Ben was having a great start to the season and unfortunately his injury put a damper to his start but he looks great so far in the winter and I'm expecting him to pick up where he left off last year" says Eli.

Kurtis Thomas (Harwich, Ma), Braden Green (Exeter, NH) and Vince Freddo (Marblehead, Ma) are 3 new additions to the 2017 team.  Kurtis is a big strong left handed hitter who can play 3rd base, outfield and pitch and Braden is a left handed hitting middle infielder who can also play outfield and pitch. "Kurtis and Braden played in the EBL last year so we were very familiar with what type of players we were getting when they showed up at tryouts. These 2 guys are huge impact players that we are very excited to have and to top things off they come from great families and are great teammates.  They can both smash the ball and will help tremendously on the mound" says Eli.  Vince is another lefty hitter/thrower who came over to us from a local program who had a great tryout for us.  He can play any outfield position and will get plenty of opportunities on the mound.  Vince has worked hard so far and is fitting in very well with all of the guys.  We have big expectations for Vince this year. 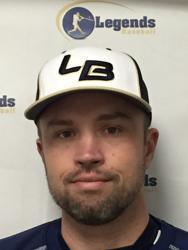